Volgograd (rus. Волгогра́д) is one of the biggest cities in the game, the other big cities are Moscow, Berlin, Leningrad, Vladivostok etc. 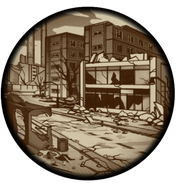 Add a photo to this gallery

On the world map Volgograd is marked with a blue icon with a white bed inside, because there is a safe haven on the outskirts of the city.

Like every other city, Volgograd has intact houses and ruins. Some of the rare buildings are a military base, construction sites, schools, etc.

As Volgograd is pretty big, it takes a lot of time to loot it. What makes looting even harder is the elevated radiation level, so it is recommended to use a gas mask and a chemical suit. Bringing chlorcystamine and IR-190 is also advised.

Looters can also make the searching a little harder since Volgograd has a level 1 bandit city fort. Although these looters are poorly armed, their patrols can become annoying during looting if their base is not defeated right away. Their base offers decent loot and protection against radiation, so you can rest there.

Retrieved from "https://dayr.fandom.com/wiki/Volgograd?oldid=38345"
Community content is available under CC-BY-SA unless otherwise noted.