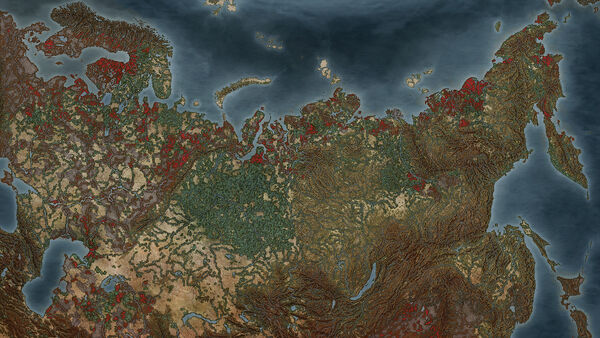 Ufa (Уфа́) is the capital of the Republic of Bashkortostan. It is located about 450 km east of Kazan. In the radioactive areas surrounding the city, you may encounter giant bee workers, giant bee soldiers, the Queen's guards, as well as the Queen Of Bees in their immense beehive located at the very center of Ufa.

Ufa is a great location to settle a base, as honey and acid glands are essential for trading. But beware, it is the most radioactive town in the game with +9.5 radiation per hour.

The hive is full of honey and is therefore a very profitable looting spot. It is divided in nine parts, the queen being in the center part.

The honey can be looted without a fight, except in the beehive center in which fighting the Queen is unavoidable. Bees will also patrol and can attack you randomly. The patrol consists of Queen's guards and giant bee soldiers and can be especially deadly when composed of three Queen guards. Since the combat update, fights with the hive patrol cannot be avoided by doing an action that consumes time, meaning, you will get attacked one time or another.

You will find in total 450 honey in the whole hive (50 per location). While traversing the tunnels, you may occasionally have an option to gather honey (chance to trigger fight with bees). Do note that the honey in the location CANNOT be looted until you have defeated the Queen's Guards of that location or the Queen Bee and her guards.

The honey will not be produced until the queen has been defeated. It is recommended to loot the entire hive before fighting the Queen Bee, so as to loot all the honey before the remaining bees make more. The production takes approximately one month.

It is a great place to obtain chitin for chitin armor, as dead bees give a good portion of chitin when butchered.

Retrieved from "https://dayr.fandom.com/wiki/Ufa?oldid=38510"
Community content is available under CC-BY-SA unless otherwise noted.