" A large and heavily fortified base. The local gang is a threat to the entire area around it. "

Bandits grouped together in gangs that grew not only in size but also in power. Taking shelter in heavily fortified camps, each one controlling the territory they reside and becoming a threat for any survivor group in the vicinity.

This unique fortifications are found in the outskirts of towns and cities in the wasteland each varying in strenght from a fairly easy to incredibly hard.

At least 7 camps will stray from the survivor quest routes so in order to reach them it will be necessary to do extensive traveling.

Inside the on-line community, classification of the wasteland forts parameters will vary from player to player and each will give a distinct definition of what he thinks a Super Bandit Camps has to be.

By this description, all 15+1 camps could be considered Super Bandit Camps as they all share the same traits one from another even when being looted they are all referred as "Bandit fort" .

The now widely used term for Super Bandit Camp was originated in the on-line community to distinguish the camps that:

Currently points 1 and 2 are no longer applicable since both of them are not active in the current game mechanics and only point 3 applies.

While it can be stated that all 15+1 wasteland forts are Super camps, for an easier understanding this section will use the common dual class for the Bandit forts plus an extra class.

only 5 Super camps or SCAMPS for short are recognized by some of the players of the community, these are:

These forts have an enemy presence with enormous firepower at their disposal including PKM machineguns, SVD sniper rifles and RPG-7 grenade launchers.

Before engaging, the survivor must be sure his equipment and perks are up to the challenge or else be ready for an early grave.

the rest of the camps will have a more diverse organization of their members ranging from a dog or an axeman to assault units.

Most of these camps are located in the main quest line of the game so its hard to miss them.

Quest related camps are part of the story, hence the name. 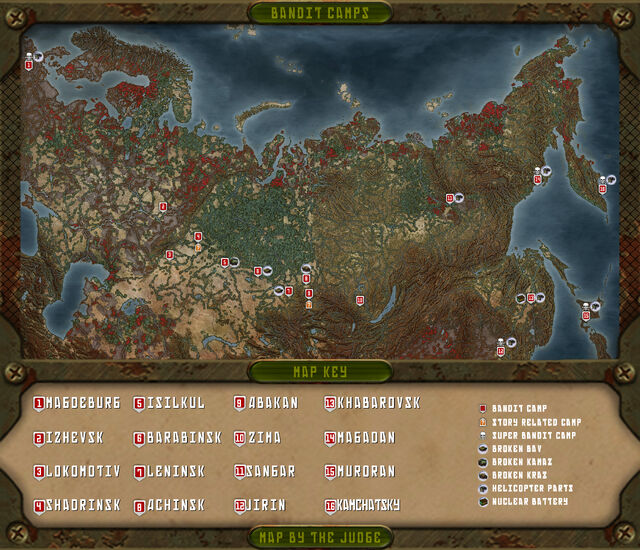