Safe havens are safe houses that were built as a shelter for the inhabitants of the city near which they are located. During or after the nuclear war those cities were abandoned and so were the shelters on their outskirts. 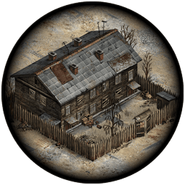 Add a photo to this gallery

Now, the player can use them in several different ways: a player who's a nomad can use the safe haven as a temporary shelter from radiation or as a rest stop after a long trip, or even use the brick oven to cook something.

To a player who's looking for a place to set up a permanent base, a safe haven is probably the perfect start. Upon arrival, the player can repair the abandoned wooden house, abandoned well and a brick oven, which is much cheaper than building it yourself. In addition to that it protects from radiation and offers a sleep bonus, the players can build their own structures, such as a forge chimney, or turning the already given draw well into an even better, water purifier.

There are currently 19 safe havens present in the game:

Every safe haven has a survivor's cache that looks the same, but has different loot. Sadly, those caches are only available on the premium mode, which you can only buy using real money (the ammount depends on which country you are playing in).

Retrieved from "https://dayr.fandom.com/wiki/Safe_havens?oldid=38047"
Community content is available under CC-BY-SA unless otherwise noted.