Free Attack: An attack against an opponent who has started moving in the available attack area. Once per turn

Pull: On a successful attack the victim is pulled one tile closer to the toad.

200kg
Giant toads that mutated because of radiation. They are ranged enemies that can attack from far away and pull their targets with their long tongues. When a toad hits its target, the target is pulled one space closer to the toad.

Can be found alone, in pairs or in groups of snakes and turtles.

Radioactive toads will attack with their long tongues in a move, attack, or move pattern when the player is located far away from them. Their tongues are sticky and if contact is made, the Survivor, his pets, or allies will be moved 1 space closer to the toad.

They only appear in radioactive swamps. 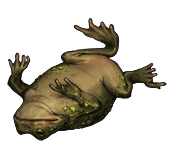