" A roll of blue electrical tape. "

Tape is used for a wide variety of crafts and repairs but, since it is a scarce item even after the latest update where it increase the amount of insulating tape per looting.

It is recommended to use bone glue whenever possible or have a abundance of detoxifying potion to trade them at Sverdlovsk.

Insulating tape can be used for trading purposes on some survivor camps.

Now getting the alcohol. The most effective way to get alcohol is to grow potatoes in greenhouses to brew into moonshine, then make alcohol from the moonshine, and finally then trade the alcohol for salt in the trades mentioned above. Greenhouses might be out of question for a early game player. Then, the second easiest way is to farm bandits for vodka, then make alcohol from vodka. This is far less efficient, but gets the job done early game.

Survivors need to be careful with the amount of uses of their chemistry set when attempting this cycle, since making alcohol uses up one use of chemistry set. Therefore this trade cycle is recommended for end-game players (who already have access to chemistry table) looking to trade tapes in large amount. 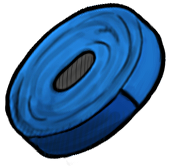 Soviet/Russian electrical tape is commonly colored blue, the most famous brand being Izolenta.