Hard to obtain and even harder to maintain, peace has become a luxury only a few will ever experience.

Bandits, crazies, animals, mutants, and even supernatural beings will be a constant threat to the survivor's life. If he wants to stay alive, the survivor must not only learn how to fight, but master the art of war.

In this chapter, the survivor will learn how combat initiates, call for help, get to know the terrain, move, and attack.

The battlefield is where combat develops. every time a fight starts, the survivor will automatically taken to the field unless choosing auto-battle.

The items found in the combat zone are varied, ranging from traps, obstacles and enemy spawn points, if wise enough the survivor can use the field to his advantage or fall prey to them if careless.

Elements of the battlefield Edit

The first and main element of any battlefield is the map itself, It is a 7x7 square grid with obstacles, traps and structures around. Depending on where the combat takes place, the type of terrain the survivor will encounter, for example, fighting inside a city will spawn walls, light posts and manholes in the battle field, while fighting in a swamps will show puddles of mud. 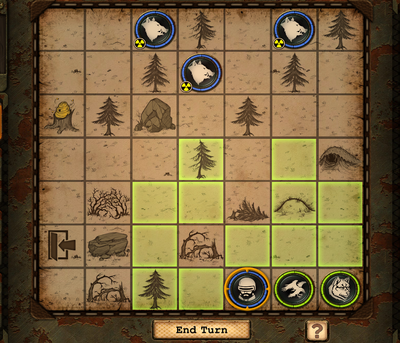 Obstacles can be cleared or created depending on the survivor strategy, by clearing a bridge or falling a tree an enemy will be forced to take a different route, this giving the player extra time to escape or lure enemies into a trap. These can also impede the survivor movement and make him fall prey of his own mistakes.

Not every obstacle can be destroyed in a single attack, an other are invulnerable to small arms fire.

High points give the advantage of letting the survivor increase his maximum weapon range and shoot over walls or other obstacles. This advantage also comes with a drawback as standing on a hill or watchtower will also make the survivor an easier target for ranged attacks.

Destroyed trees will turn into broken trees, which become a blockade. A unit that was on the tree tile when it was destroyed will still stand on the broken tree, and can choose to stand still or move out.

Trees can be destroyed by direct hit from gunpowder grenade, explosion from other explosives, and machine guns.

The spawn points are special squares found in the battlefield, these squares have the ability to generate enemies on their own or by command of a higher level enemy.

When the manhole is activated, a pair of red eyes will appears inside the hatch and a radioactive rat will spawn on the next turn, and the manhole will turn into a regular manhole.

The bee spawn cells can be destroyed by using rockets.

Commonly found on forest, the lair is a cave where a bear lives. in order for the bear to appear, the lair must be attacked, standing near it wont trigger the bear.

The lair cannot be destroyed without triggering the bear.

Found on some of the bandit forts (Super bandit camps) in the wasteland, the only working bandit spawn point is located inside the Jilin bandit camp, the bandit leader will summon every turn a bandit ally to aid him in battle against the survivor.

The bandit spawn is a type of wall, it can be destroyed by using rockets, grenades or the bardiche.

With some exceptions, the escape door will always appear in the battlefield. This special square cannot be destroyed with any weapon.

This is the only way of leaving a fight without it having ended. To use the escape door, the survivor must stand on the square and choose the escape option on the actions menu. Escaping costs 1 AP (Action point).

Retrieved from "https://dayr.fandom.com/wiki/Combat_Mechanics?oldid=34440"
Community content is available under CC-BY-SA unless otherwise noted.