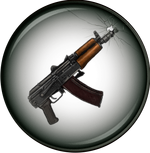 Weapons, are all instruments used either in defense or attack, these objects can be blades, blunts, explosives, arsonists or firearms. Weapons are classified into:

Short-range, most melee weapons have the main function of serving as tools of work and survival.

Hand to hand, the basis of combat. Many melee weapons lack power, but when ammo is low, a knife or axe could be all that stands between life and death.

Weapons of short to medium range and equal damage, light weapons can be used mostly when there are wounds in the arms.

The vast majority of members of this classification lack the ability to pierce armor.


Similar to a bow and arrow in operation, the crossbow does not require bullets to be used so when ammunition is scarce, a crossbow can be of great use.


Weaker compared to assault rifles or conventional rifles, pistols make up for their lack of power with the relative ease of finding ammunition.


Of short to medium range and moderate damage, assault rifles lack anti-armor properties but their ammunition is abundant and they are easy to maintain.


Light weapons obtained only during the Christmas / New Years and Halloween events. All members of this category are single-use except for the hunter chain.

Long range and great destructive power, heavy weapons ensure the destruction of the enemy with their immense firepower and thanks to the fact that most can pierce armor. Due to their size and weight, very few members of this classification can be used if the survivor injures an arm.


Powerful and long-range, rifles piercing armor and only using one cartridge at a time are one of the favorite weapons in the wasteland.


Shotguns spread their shot over a larger area than conventional ammunition, damaging multiple enemies with each shot. The damage done with these will depend on the distance between the survivor and the enemy.


With a high rate of fire and capable of delivering massive damage to the target, machine guns guarantee victory over the toughest of enemies.


Throwable explosives like hand grenades or molotov cocktails. Although not as effective as a rocket launcher, these are light and easier to obtain (except for the stun grenade)


Heavy Weapons obtained only during Christmas / New Year and Halloween events. All members of this category are single use items.