The wastelands are dangerous and you will encounter many different enemies. Whether you are trying to avoid them or to hunt them, have a look at this section of the wiki to learn about your foes. Some tips may save your life! 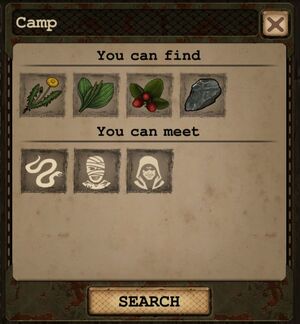 The main character can encounter enemies while doing activities in their biomes (e.g., he can meet bears in the forest, bandits in cities or wasteland), including while searching buildings in the cities.

The encounter will happen only at the hour (e.g., 5:00, 16:00), and the encounter chance depends on the zone the player is in (further into the game, enemies will be more frequent).

When searching in a biome, the main character will know the list of possible enemies. While doing search, one of the enemy types might pop up as one of the search result. The main character can then choose to fight that enemy or to continue searching (not fighting the enemy). Note that the sudden encounter might still happen while doing search, as this counts as activities in a biome.

Each enemy type has a fixed list of squads of enemies. For example, there could be an encounter with two snakes, three snakes, or five snakes in roads and wasteland around Moscow. Each unique squad can be defeated two times before disappearing from the list of possible squads in that location.

Defeating all possible squads of an enemy type will cause that enemy type to no longer spawn. Continuing the previous example, one the main character have beaten each snake squad twice, there will be no more snakes on the wasteland.

As soon as any enemy is killed, an internal timer of one month will be started, and when this one month has elapsed, all enemies will respawn, restoring them to their full number of squads.

This internal timer can be useful to track how much longer an encounter-free period will last. For example, before looting important city, the main character might first kill all enemies on roads/wasteland, which prevent them from appearing as random encounters until the one month is up. During this period, the character can loot the city peacefully without the threat or annoyances of random encounters (except for bandit patrols, which can be vanquished by defeating the bandit city forts in that city).